Arena of Valor is bringing the $100,000 Non-Pro Tournament (AoV NPT) to Europe! The brand new tournament is open for all players and teams in Italy, Sweden, Germany, France, UK and Spain.
Every team has a chance to qualify to represent their country. Your favorite influencers already signed up! They will team up to lead you in a five week long competition. Winner will have a chance to secure a spot at the AoV NPT DreamHack Winter Finals at the start of December.

The AoV NPT tournament will have three phases.

Influencers from six countries will form teams to represent their country in the tournament as the ‘national tutor team’. Meanwhile, any Arena of Valor players from those countries can register to partake in the AoV NPT to compete in the open qualifiers. The winners of each open qualifier will then get to team up with the influencer as the ‘national apprentice team’.

The influencers and casual gamers will form an alliance to fight in a national tournament. Over the course of five weeks, a round robin tournament will determine which countries will make it to the AoV NPT finals at DreamHack. Both the influencer and the non-pro teams will earn points for each victory and each week two national teams will be invited to play in the ESL Poland studio. 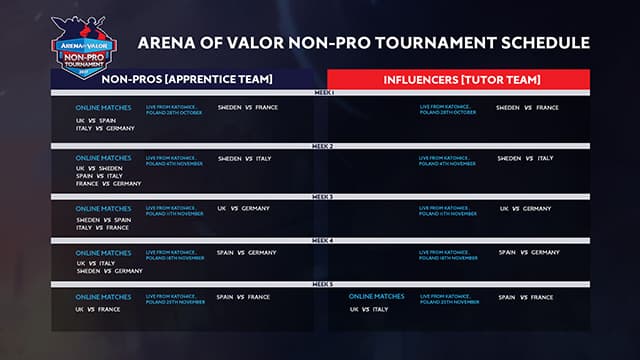 The top four national team of the round robin phase will be invited to AoV NPT finale at DreamHack Winter to fight for EU champion title and their share of the $100,000 prize pool.
The open qualifiers are set to take place on Sunday, October 22nd, and are open to any team consisting of five players that reside in the country they are competing for.

The AoV NPT DreamHack Ticket Challenge takes place on Sunday, 29th October. All EU countries that aren’t part of the NPT qualifiers, including Turkey, will be able to play in this stand-alone competition. Simply assemble a full squad for your country (only same nationality teams are eligible) and you’re good to go. The top two teams will win tickets, travel & accommodation to DreamHack Winter, as well as $1,500 and $500 for first and second place respectively.
Don’t forget to keep eye on the social and video channels of the AoV NTP influencers, who will promote their respective, regional iPhone giveaway throughout the competition. 3 iPhone 8+ and 1 iPhone X will be up for grabs in each country – you don’t wanna miss out!
Source: ESL Gaming