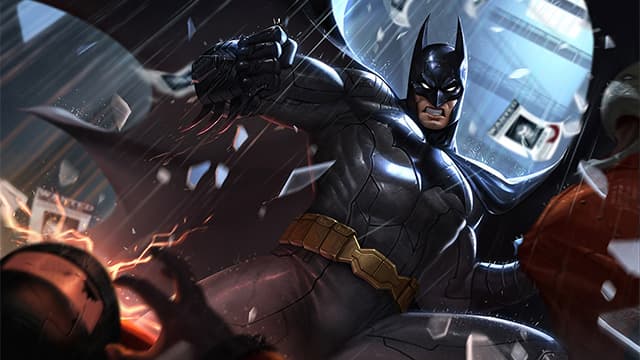 Arena of Valor has added the newest hero Batman, the Dark Knight to its roster. Batman is the first DC hero joins Arena of Valor. 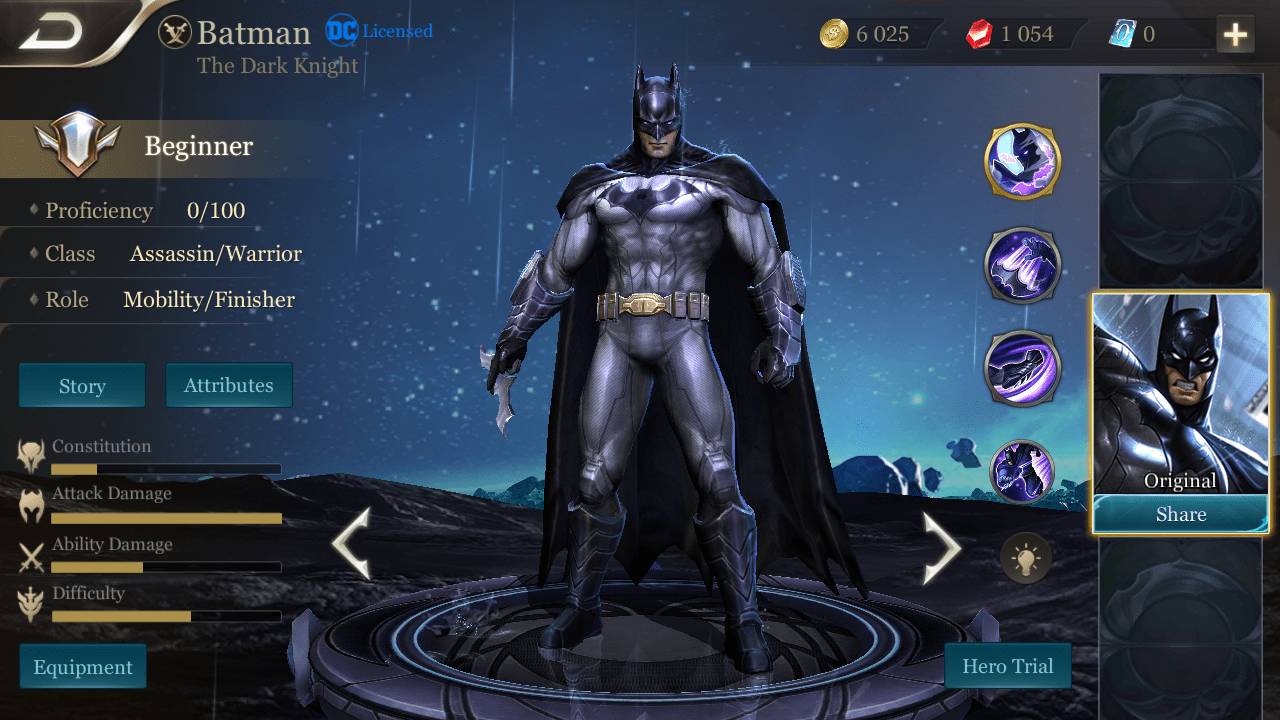 Players can get Batman by simply by logging in to the game starting Nov. 10. Aside from being free, he’ll also be available permanently giving both old and new players a powerful new hero without the need to spend Gold, Gems or Vouchers. 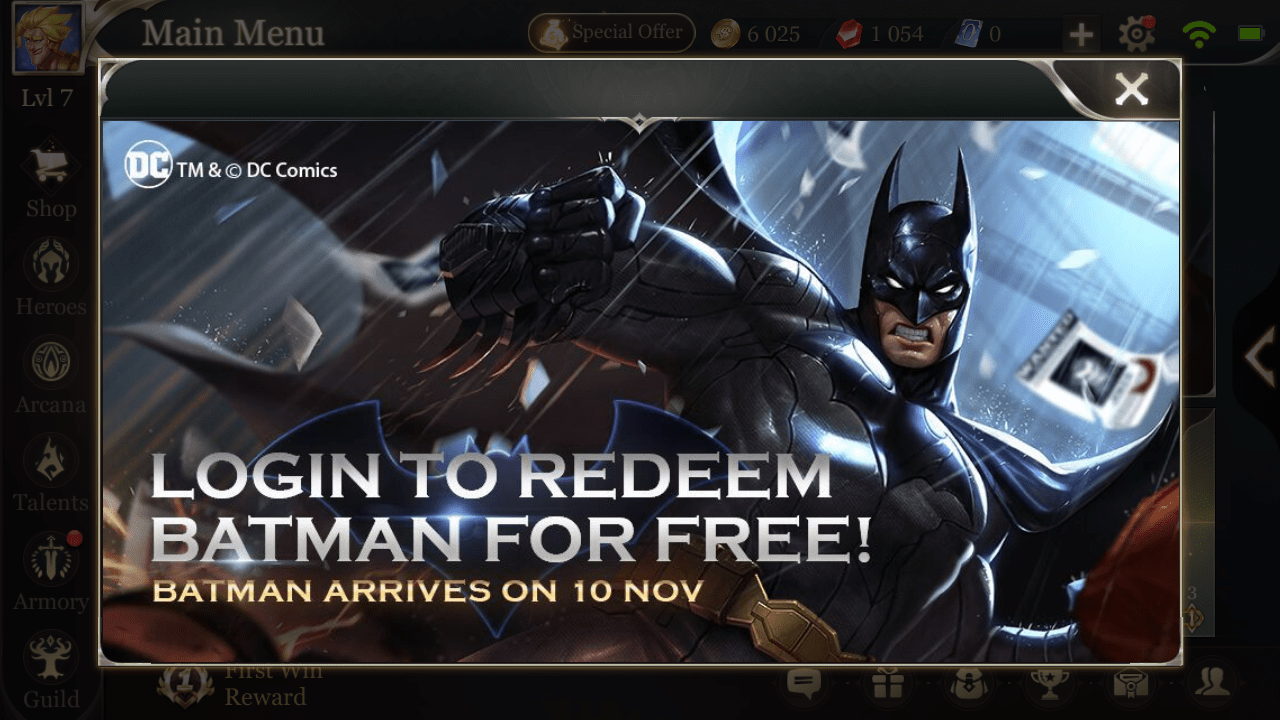 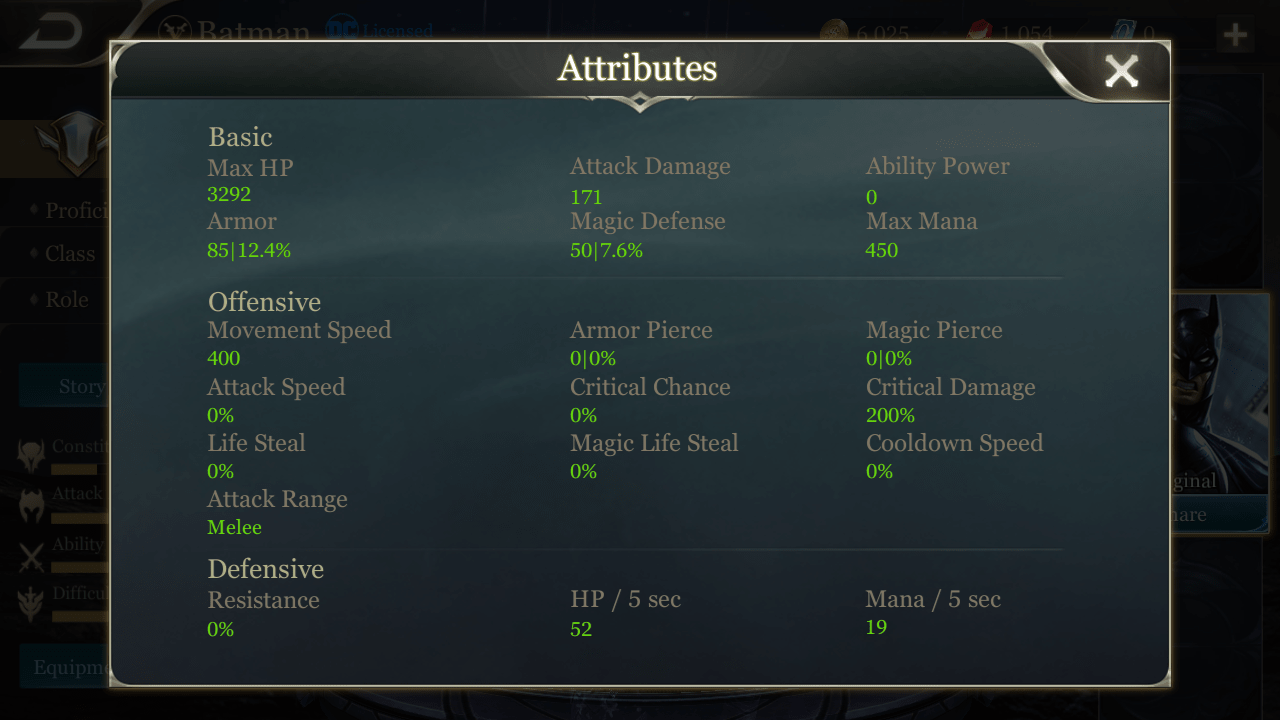 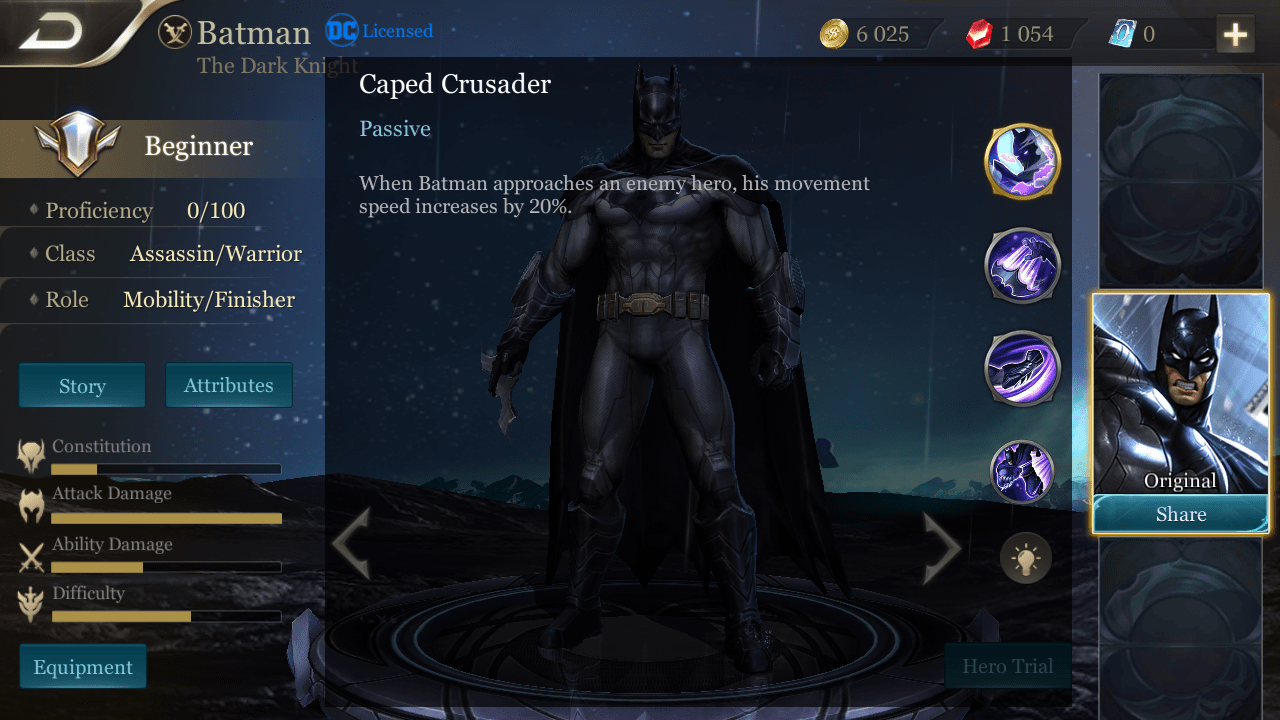 Forearm Strike
Batman attacks with his forearm blades and deals physical damage to nearby enemies. One random enemy will take double damage. 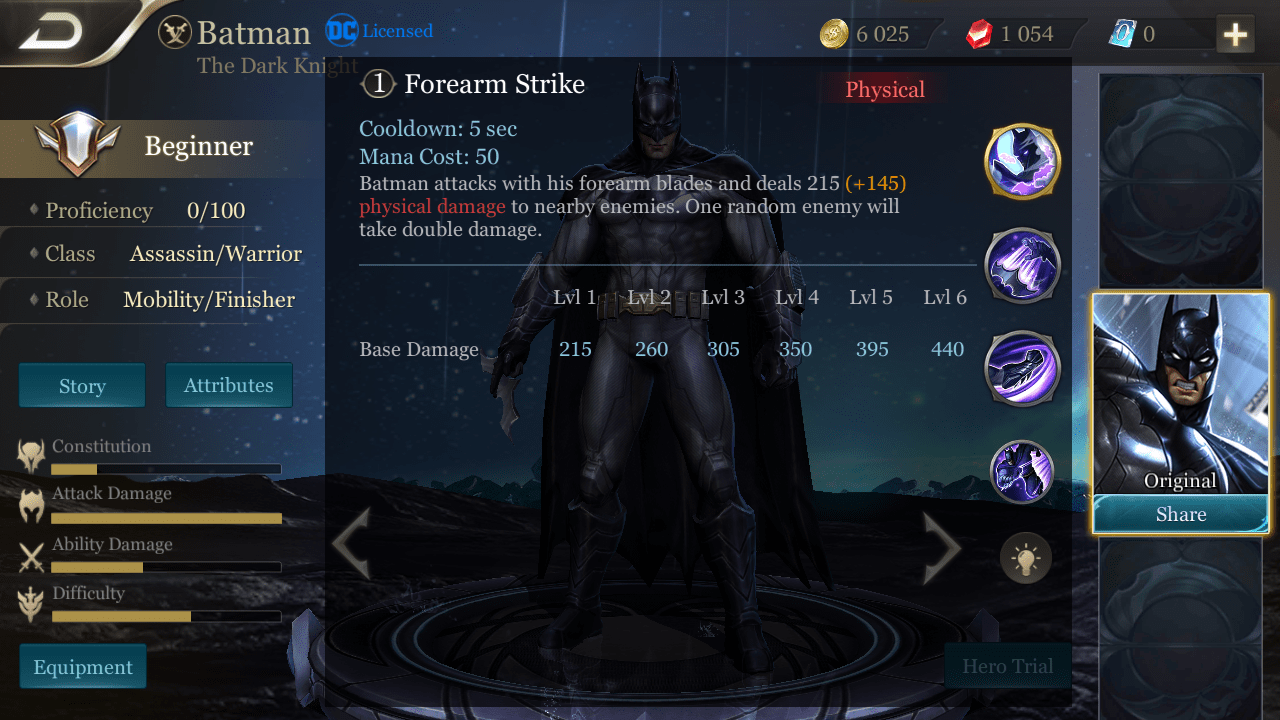 Batarang
Batman launches an explosive Batarang that deals physical damage to enemies and reduces their movement speed. Percent of HP lost will be converted into additional physical damage 3 seconds later. Enemies hit are stunned if attacked by Batman again, and Batman restores HP. 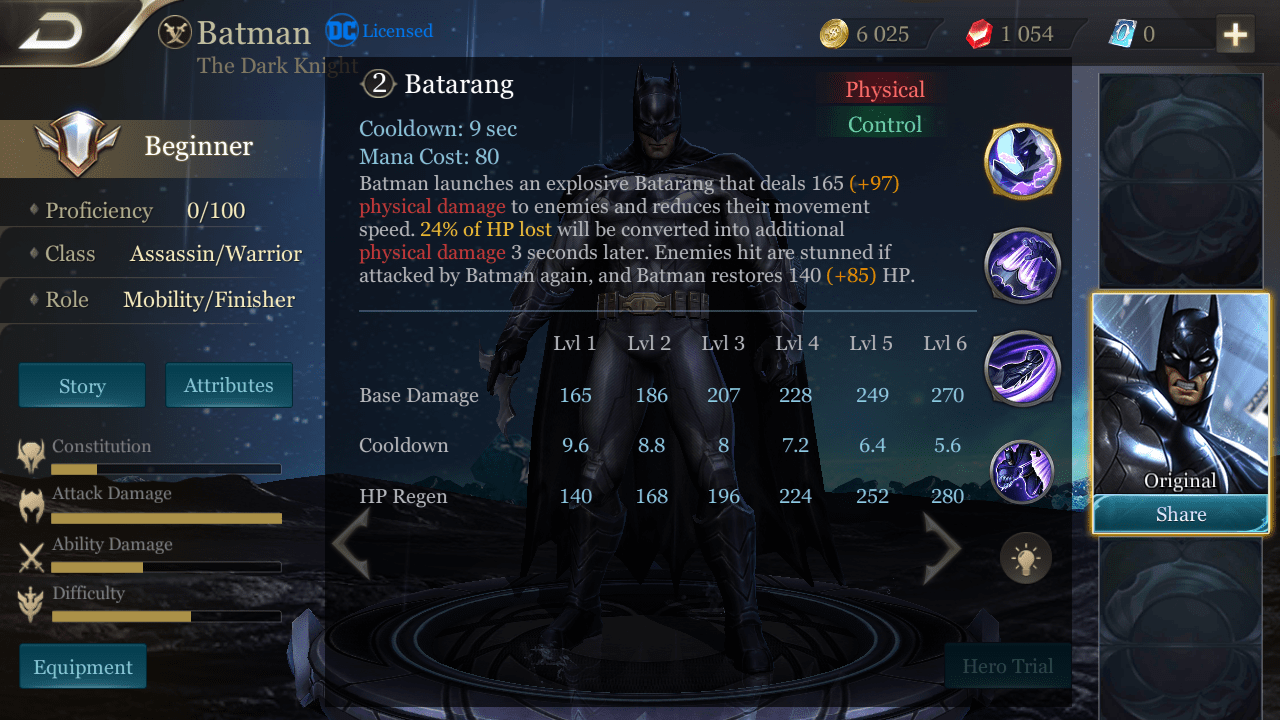 Dark Knight
Batman conceals himself behind a colony of bats and becomes invisible after 1.5 seconds. Batman’s invisibility lasts for 30 seconds unless he stays within 6 units of an enemy hero for more than 3 seconds. If the ability is used again while invisible, he will fly towards the target direction, dealing physical damage to enemies in his path. He gains 50% attack speed for 5 seconds after coming out of invisibility. 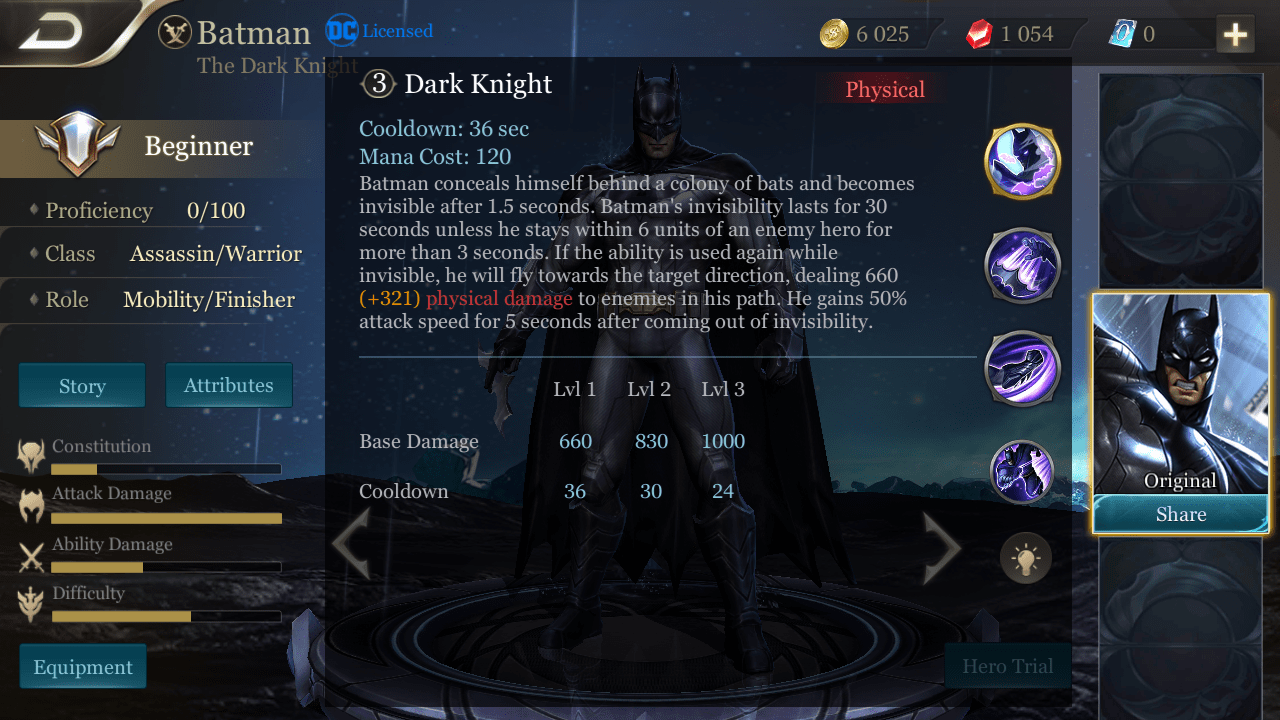 Tips
Use Batman’s Dark Knight to get close to enemies, then look for protection opportunities from allies and mount a surprise attack. Activate Dark Knight again to deal a quick burst of damage. You can also activate Dark Knight while in the brush to prevent enemies from detecting Batman on the mini-map and escaping. 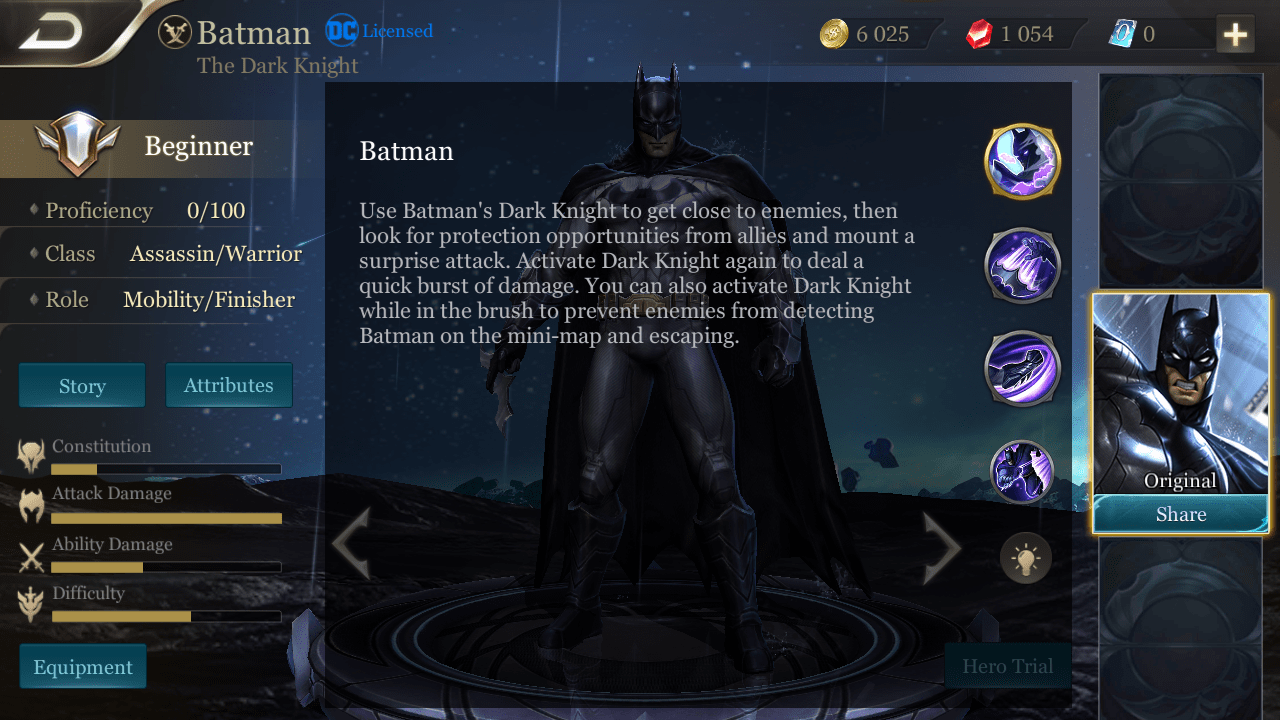 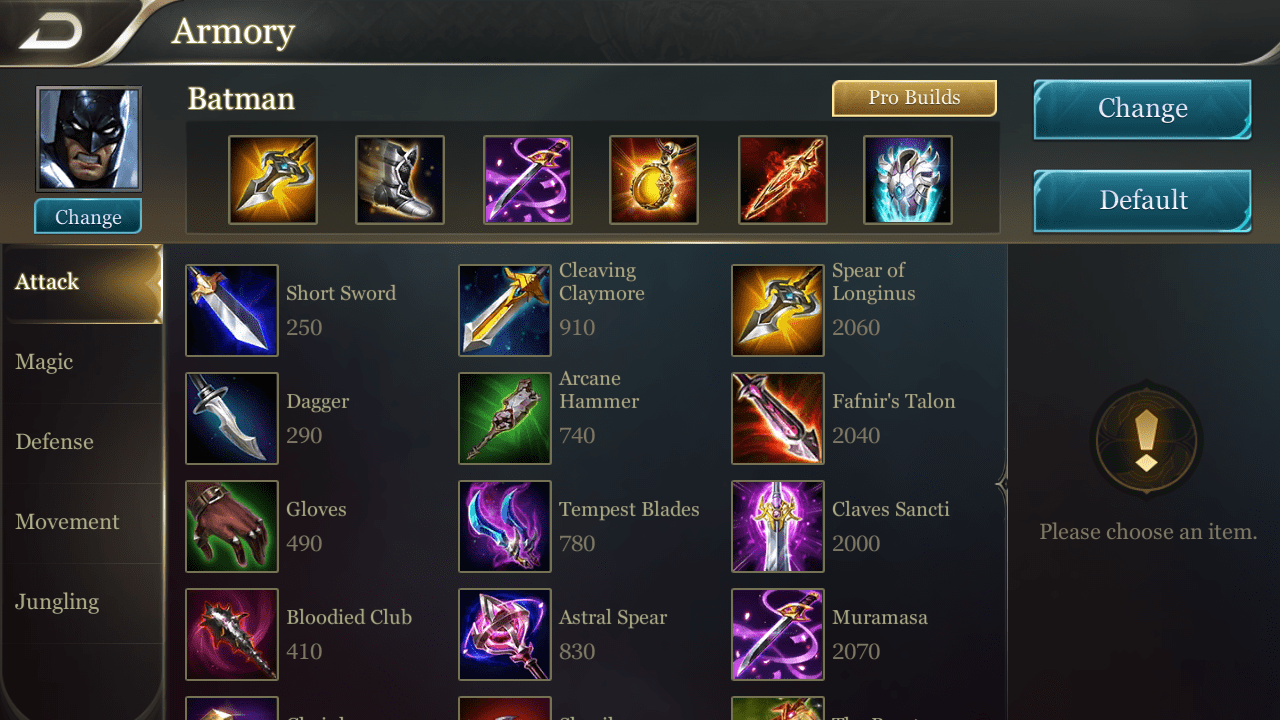 Batman has become a symbol of dark justice that hangs over Gotham City. Born into wealth as Bruce Wayne, he witnessed his parents murdered in front of him as a boy. This tragedy transformed his entire existence, reshaping him into the consummate crime-fighter.

Wayne traveled the world for a decade, training his mind and body relentlessly, pushing himself to the limits of human capacity, all in preparation of donning the mantle of the caped crusader. His years of tremendous effort have left him as not only the world’s greatest detective, but with a physical prowess that has yet to be bested by any foe.

As Batman, he has consistently been forced into battle in an array of alternate worlds, dimensions and universes. And it was through a bruising encounter with Zephys that Batman pieced together the existence of Athanor. Zephys collided into Earth, bringing with him a power of unimaginable magnitude. He had come to subdue the earth and build a new world. One that would be subjugated by Athanor and be forced to provide fresh troops for its eternal war.

During the tumult, Batman found himself chasing Zephys, passing through countless worlds and fragments of time. Finally catching up to him, Batman sought to end Zephys’ dark plot right then and there. However, he just could not find an opening to end the fight. Suddenly, the hero Valhein appeared, under orders from Thane, to investigate the strange rumblings of doom. With his aid, Batman finally beat back Zephys and temporarily banished him back to his realm.

“Traveler, welcome to Athano,” Valhein whispered in a deep, but urgent voice. Batman felt drawn towards this mysterious new land, to understand just what sort of role it would play in his destiny. Stepping into the light, he found himself in Thane’s court. The resplendent king sat high above the rest as a gloomy pall hung over the room. He thanked the Dark Knight for subduing Zephys and handed him a shining gem, a fragment of Andura.

Upon touching the gem, Batman experienced a vision of fire and despair. Gotham lay in ruins, consumed by flames that licked the air. Its inhabitants were being led towards the darkness in chains. The old and feeble were disposed of. The young and strong were ripped away from their loved ones and cowed. And above all of this sat a malevolent shadow that seemed to glow brighter than the very flames swallowing the city. Then, at the snap of its immaterial fingers, the light extinguished, and life existed no more.

Batman stood unmoving, transfixed in the horror. “This isn’t real, is it?” were his only words. This must be some sort of trick. However, the solemn shake of Thane’s head and his mournful eyes, brought ice into the Dark Knight’s veins. Thoughts raced through Bruce’s mind. What is this madness? What is this despair? Thane finally spoke “It is what will come to pass, if we sit idle.” He continued, “The Andura fragment you hold must be returned whole. It has the power to create, and a devastating power to destroy. It matters not where your world lies in time and space, all is connected to Athanor.”

And with that, Batman felt himself hurdled back to Gotham, to ponder the choices that lay ahead. Then with quiet and steeled determination, he fought. With Lucius and Alfred’s aid, he modified his armaments to prepare himself for the coming battle. His friends worried about him. They were unsure of the threats lying in wait for Bruce. But as we all know from experience, never underestimate the Batman.