Moren is a powerful Marksman that gets stronger as the battle rages on. Farm with Precision to buy better equipment that increases both survivability and damage. 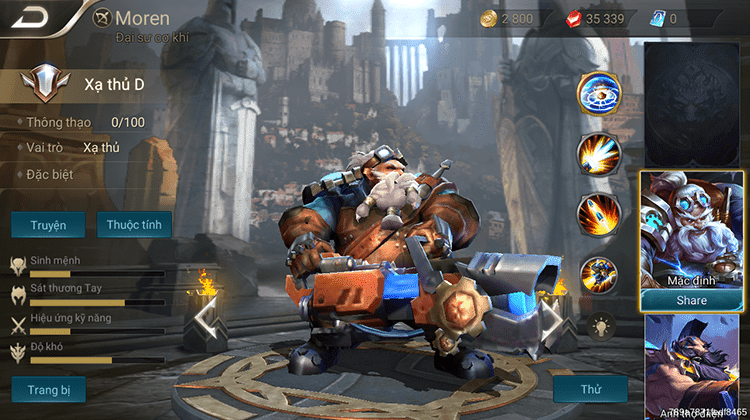 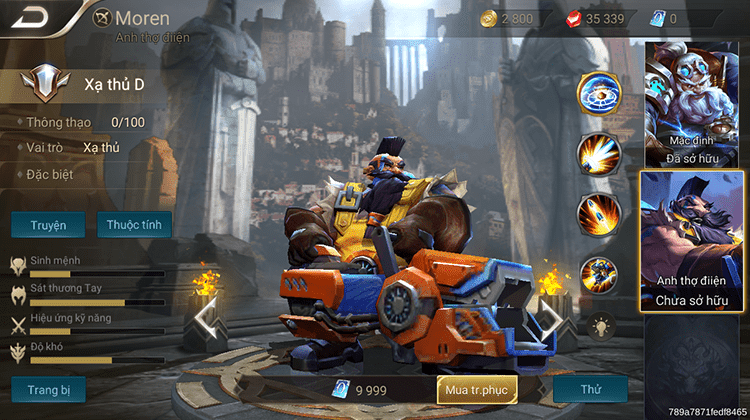 Precision (Passive): Every successful attack and ability places a Mark of Precision on Moren. At 5 stacks, the cooldown for Tactical Maneuver is refreshed immediately and Moren gains 12-26% (1% increase per level) Life Steal.

Tactical Maneuver: Moren’s movement speed is increased by 40% for 1.5 seconds. His next normal attack within 5 seconds fires 2 bullets, each dealing physical damage. Moren also gains armor and magic defense for 5 seconds. These effects can be extended by successful normal attacks up to 10 times.

Magnetic Storm: Moren launches a magnetic grenade towards the target area. The explosion triggers a magnetic storm over 2.5 seconds, dealing physical damage 6 times to enemies in the area and reducing their movement speed by 50%. Enemies knocked into the storm by Impact Barrage are also stunned for 1.5 seconds.

Were it not for his violent and stubborn temper, perhaps Moren would have become a scholar, quietly studying in a tower somewhere. But being a dwarf, Moren was born to drink and fight, preferring fists and bullets over words even when the debate was academic. As a result, no scholars wanted to take him on as an apprentice. This forced him to use his dexterous hands to forge another path: science and blacksmithing.
According to (somewhat incomplete) statistics, nearly half of the most highly regarded weapons in the land were either crafted or modified by Moren. Therefore, everyone, from the mightiest of Gods to the most despicable of demons, holds him in high regard. This also meant that Moren was able to maintain a neutral position and, in some ways, remain above it all, for a very long time.
Slimz the Trustworthy sensed a new business opportunity in Moren’s weapon forging abilities. After haggling over the price, the two eventually signed a lifetime contract. From then on, Slimz had complete ownership of all weapons created by Moren. In return, Moren received several precious mechanical diagrams, an endless supply of materials, and the Castle of Alchemy. This partnership made both parties extremely wealthy, but it also made them the new target of the Army of the Fallen.
Following a joint assault by Preyta and Skud, the Castle of Alchemy suffered a devastating defeat. Slimz hoped to retain at least some influence, but he had nothing left to bargain with, and could not persuade the stubborn Moren to stop resisting. He had no choice but to terminate the contract and make Moren a free agent again. Deeply moved by this, Moren deployed his few remaining weapons at the castle and launched a final attack that halted the enemy’s advance.
Moren’s actions enraged Skud who, in a devastating fit of rage, completely annihilated the castle’s defenses and all but destroyed Omega, who had recently arrived to aid the castle’s defense. Moren, who was seriously injured, attempted to detonate an incendiary bomb that would have taken Skud down with him. However, Omega dragged him to safety before he could detonate the bomb. Moren was grateful yet resentful. Eventually, he followed Omega’s advice and accepted a proposal by Thane, the human commander.
In exchange, Omega shared with him the secrets of advanced mechanical principles, allowing him to create a new generation of high-tech weaponry.